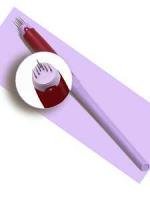 The perforating tool star point has 7 needles in the shape of an abstract star point and is ideal for perforating decorations and borders. The outer 2 needles are slightly longer than the other needles allowing you to re-insert easily but also to create an inverted perforation. After cutting out the perforations for a card outline, a nice even zig-zag edge is formed. The tool is also suitable for making a separate element in a card or project. The tool can of course also be combined with other perforating tools.